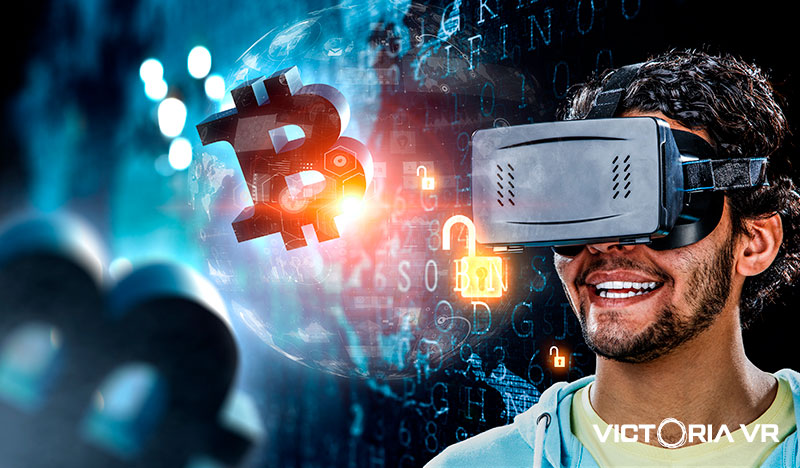 The real world and the virtual world will be merging increasingly; this merger will introduce benefits and advantages that have never been available before. Virtual reality built on blockchain technology and using cryptocurrencies – this combination opens up a plethora of new, wonderful opportunities. Please read on to find out more.

Thanks to the massive technological developments in the field of computer science, most of us carry a powerful computer in our pocket all the time. Yes, our current smartphone is way more powerful and even cheaper than any home PC from the 1990s.

VR headsets are available at prices comparable to average office computers or smartphones. Cryptocurrencies are accessible to anybody who can connect to the internet, for example, through Wi-Fi. And many high-quality software crypto wallets are available for free. Nothing seems to stand in the way of massive adoption of virtual realities built on blockchain, and using cryptocurrencies.

What is Virtual Reality (VR)

Although the VR world is artificially generated, the user experience is lifelike. With many simulations, it is difficult for the brain to distinguish between physical and virtual reality. That’s why VR is fully immersive.

VICTORIA VR is the first to use only photorealistic 3D virtual reality to bring realism to the highest level and give you a completely immersive experience.

VICTORIA VR is the first Massively Multiplayer Online Open World Game with photorealistic graphics in virtual reality. VICTORIA VR is a blockchain based world built and owned by its users. The whole VR world is rendered in Unreal Engine, and it is built to be a universal platform for all virtual realities, games and decentralized applications, collectively creating a metaverse – a shared virtual realm where people are free to do absolutely anything.

Cryptocurrencies or virtual currencies typically use blockchain as an immutable public ledger. They allow not only peer-to-peer payments but you can also use smart contracts to automatically execute otherwise complex and time-consuming processes, for example, you can pay salaries, dividends, commissions, fees, set up conditional payments once the goods are delivered, and more.

Victoria VR tokens (VR) are based on Ethereum ERC20 standard. With a pre-defined, limited volume of tokens, VR is deflationary and serves as the main currency in the VICTORIA VR world.

What can you buy for your VR tokens in the VICTORIA VR world? You can purchase VR Lands (again limited in volume), VR resources, VR art items, VR keys, VR documents, VR clothing, VR subjects, VR tickets, VR courses (lessons), and more. You can also stake your VR tokens for a year (lock and hold your VR tokens) and receive a minimum of 18% p.a. On top of that, VR tokens can be used for trading as most other cryptocurrencies.

Get your VICTORIA VR (VR) tokens and benefit from a minimum of 18% p.a. from staking.

The virtual world of VICTORIA VR uses not only VR tokens but also NFTs – non-fungible tokens. Here’s what that means.

Fungible describes an asset that is not unique. Some examples:

Non-fungible describes an asset that is unique. NFTs (non-fungible tokens) contain identifying information recorded in their smart contracts. It’s this information that makes each NFT different and as such, they cannot be directly replaced by another token. They cannot be swapped like for like, as no two are alike.

ERC721: Each NFT is one unique item in VICTORIA VR. This standard allows us to tokenize and protect ownership of any arbitrary data, for example, a unique work of art, a unique product, a unique piece of land, a unique item. Such NFTs can also be used to prove that you have received an original product (not a fake, counterfeit).

ERC1155: Standard used to create both fungible (currencies) and non-fungible assets (e.g. in-game items). The advantage is that transactions can be bundled together – which reduces the cost of transferring tokens.

Virtual Reality With Blockchain and Crypto

VICTORIA VR makes use of the most advanced technologies to give you the best user experience:

Many Benefits of Virtual Reality

Virtual reality built on blockchain technology and using virtual currencies brings about a most promising proposition. Virtual reality offers so many benefits and advantages that sooner or later it might be as common as a smartphone in your pocket today.

The Benefits of Virtual Reality, Blockchain, and NFTs With Works of Art
06/04/2021